Today is my last work day before the Christmas holiday, and I won’t be returning until the day after Boxing Day.  I am looking forward to some time off, as well as some time to write, and to watch cricket – and there will be plenty of cricket to watch:

The Boxing Day test between Australia and India at the MCG is number one on the list of must watch matches.  The first ball might be on the morning of the 26th in Melbourne, but it will the evening of Christmas day here in Minneapolis.  My family is getting a bit of a late start on festivities this year, so hopefully I will be able to rush out and get home in time to watch.  But if dinner goes late, and Australia wins the toss and elects to have a bat, and I miss Eddie Cowan’s first test innings, well, my Christmas will be ruined.

Here is a fun article on Mr. Cowan from Mr. Cricket With Balls.

Only one way to find out.

Also on Boxing Day, with the first ball actually on Boxing Day here in the states, is the second test between South Africa and Sri Lanka.  Sure, it is not the marquee match of the two, but South Africa is the third best test nation on the planet right now, and Sri Lanka, while struggling, has some exciting young players to watch.  Hopefully, Sri Lanka can make a match of this one.

Oh, and the best part: both matches are available live on Willow.Tv.

It’s funny, test cricket.  The whole cricket loving world will pause and pay attention to the Australia-India test starting Sunday night.  Prime time here in the states, but morning in Australia, late evening in England, middle of the night in India.  At around lunch, England will go to bed, as India wakes up, and sees the scores.  Over five days (hopefully, weather permitting), this cycle will continue.  Five days, a work week, watching 22 men play out one of the greatest dramas in sport. At this point, we like to think we know who the heroes will be…the villains, the goats…but no one really knows for sure, which is why we will all watch, as much as we can, to see the plotlines develop, the heroes emerge from the pack.  It will at first feel a little slow, but then you will blink and there will be a 100 partnership, and the batting side will have the momentum, only to have it shattered by three magical deliveries from nowhere, and the batters will build again, only to be destroyed again.  And the pitch will change as the days progress, as it is a player in this too.  The G’s pitch is known to provide an even playing field for both bat and ball, but will it continue to do so? Will it favor India’s spin?  Will it swing for Australia instead?  And lest we forget that the match is taking place at one of cricket’s greatest stages: The Melbourne Cricket Ground: 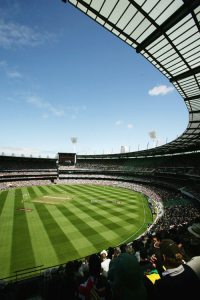 It seats 100,000 people, it has hosted test matches since 1877, and the ghosts of almost 134 years worth of cricket haunt its outfield.

In summation: I am looking forward to this one.  As are two billion other folks.  See ya’ll on twitter.