Writing about each of the 18 counties that form the current County Championship in England and Wales has honestly been a real joy.  Not only I have learned a great deal about the English domestic game, but it has allowed me to churn out blog posts like never before, as choosing a topic to write about has been a constant struggle here at Limited Overs.

I am hoping against hope that no longer having counties to write about does not kill my recent prolificacy.  (Holy cow that’s a word!)

Now, as I have gone through the counties one by one, I kept thinking to myself: who exactly has won all of the County titles?  No less than three teams have won exactly zero (I had this wrong in a previous post, unfortunately), while five more clubs have won three trophies or less.

Sure, Middlesex has won 10, and Surrey 18, but something was not quite right – the official tournament has been around since 1890, that’s 121 years!

It just took me 17 posts to solve the mystery:

Ladies and Gentleman, Yorkshire County County Cricket Club, who were founded in 1875 and made their first class debut in 1882, have won 30 titles:

The Yankees, of course, have 27 titles, the most by a sports franchise in North America, the Montreal Canadiens have won 24 Stanley Cups, to finish a close second.

In Europe, Real Madrid has won 31 La Liga titles, while Glasgow Rangers have won the Scottish League a jaw dropping 53 times – but those two don’t really count as there are only two teams in each of those leagues.

Liverpool and Manchester United have each won the first division in English Football 19 times, which I honestly think is more impressive than the accomplishments of Rangers and Madrid.

So, yeah, Yorkshire’s 30 titles is not an obscene number in sport, and I bet the Yankees will catch them sooner rather than later, but it is still pretty damn impressive.

Interestingly enough, however, Yorkshire have only won five one day cups, most recently the Friend’s Provident 40 in 2002.

Their home ground is Headingley, of course, a test cricket ground located in the city of Leeds:

Considering their success, Yorkshire have been rather nomadic, having hosted matches in all formats at 23 different grounds.

Headingley was purchased by the club in 2005 and recent renovations have ensured that it will continue to host test matches and Elton John concerts for years to come.

Oh, and of course, Headingley was the site of the one of the most famous comebacks in test cricket history, during the 1981 Ashes. England were forced to follow-on yet still beat Australia by 18 runs, only the second time a team has comeback to win in a test match after being forced to follow-on.

For my American readers: the follow-on:  “a situation where the team that bats second is forced to take its second batting innings immediately after its first, because the team was not able to get close enough (within 200 runs for a five-day match) to the score achieved by the first team batting in the first innings. It is applicable only in the longer (more traditional) two-innings-each match.”

Thanks for everything, Wikipedia, I mean it.

And just for fun, let’s post this again, too:

I love the Internet.

Notable players?  Yeesh, honestly too many to count.

Martin Hawke, who was a nobleman and known as Lord Hawke, captained the side to eight of their 30 titles, while Brian Sellers wore the armband for six Yorkshire Championships.

Here’s a drawing of the former, first published by Vanity Fair in 1892: 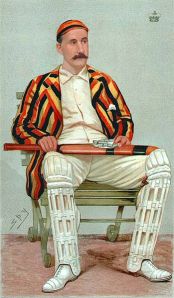 Lord Hawke, the 7th Baron Hawke of Towton:  a Cricketer.

And lest we forget:

Rhodes was the first Englishman to complete the double of 1,000 runs and 100 wickets in test matches. 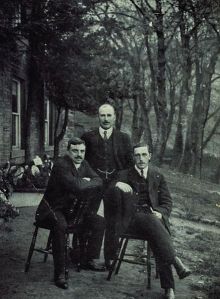 That’s him on the right, with Yorkshire teammates Schofield Haigh and George Hirst in 1905.

And that’s it, that’s Yorkshire.  And that’s also all eighteen English and Welsh cricket playing counties.

Back on the pitch: pretty damn quiet.