I used to put Worcestershire sauce on my eggs.  This was years ago.  Worcestershire sauce AND ketchup.  Those days are over now, of course, and in fact no one at any age should really be eating that much salt, but when I was a teenager it was one of my favorite weekend meals.

And the useless anecdote above brings us to today’s County: Worcestershire.

(These posts are becoming so entirely formulaic, and for that I do apologize to my loyal reader.)

The club has won five County titles.  The first in 1964, 99 years after they formed, but their fans did not have to wait nearly as long for their second title, as they won it again the very next season.

Since then, however, the team has fallen on hard times, with only a handful of one day wins to sate its faithful, the most recent being a Pro40 title in 2007.  Looking over their current roster speaks volumes, as they employ only three players with international caps on their resume, and I have not heard of any of them.

The club plays its home matches at the New Road, and the ground has been their home since 1896. 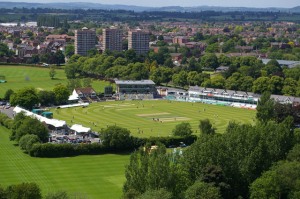 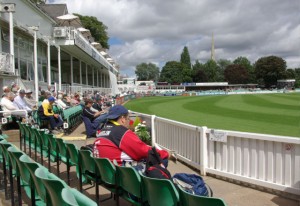 The second picture looks like just a lovely to spend the day, eh?

As I have been writing this, and while look at pictures of New Road, I briefly entertained the idea of choosing this as my club to support (that is the ultimate goal of this entire exercise).  I like their name, I love their quaint little ground, and I like their understated nature.   Worcester, the city, while not really near anything, has the English country village vibe that I think I could get on board with…but I am starting to think that I really need to choose a London based team, as I want it to be at least mildly easy to attend a match when I am in England again.

(While reading about Worcester, I learned that Worcestershire sauce was actually invented there, by two chemists, and has been manufactured at a plant located in the county since 1897, one year after the opening of the New Road ground.  A banner couple of years for Worcesterians.)

(The original brand was purchased by Heinz in 2005.  I don’t know about you, but I find the stranglehold that Heinz has on the condiment market really annoying.)

During the two different golden ages of the club, in the mid-sixties and the late eighties, the club featured some real cricketing heavyweights: Don Kenyon (34,490 first class runs for the club, the most in its history), and Norman Gifford (1,615 wickets, the second most in the club’s history (Reg Parks had the most with 2,143)) in the former period and the late Graham Dilley and Ian Botham in the latter.

Indian World Cup winning captain, Kapil Dev, he of the most wonderful moustache, also played for the club briefly in the mid-eighties.

Back on the pitch: Sri Lanka were bowled out on day three by South Africa, totally ruining my plans to watch cricket all morning both yesterday and today.  Further, it looks like there is fog in Dhaka delaying the start of the third day’s play between Bangladesh and Pakistan.   (It is 54 degrees in the capital city this morning, which I assume is really freaking cold for that part of the world.)