I was planning on writing this post with the sounds of South Africa v Sri Lanka in the background, but shoot, the match is already over, so its Fulham v Bolton instead.  What is wrong with Sri Lanka cricket?  A post for another day, I guess.

Based in Birmingham, the club was formed in 1882, made its first class debut in 1894, and was admitted to the Championship in 1895 (a full year before the first Summer Olympics in the modern era, for those interested in a wee bit of context.)

(I still cannot get over the fact that a cigarette manufacturer was the lead sponsor for an athletic competition for like 30 years.  Didn’t anyone question this when the deal was signed?  I know times were different, and that cricket was not alone in this regard, (professional tennis and cigarettes have had a long and storied relationship, for instance, a relationship that just recently ended, it seems) but the surgeon general’s report came out in, what, like 1960?  It’s all a little gross, actually.

Say what you will about the big four sports in America, but at least they haven’t used tobacco peddlers as their tournament sponsors…imagine the Marlboro Light Super Bowl…

The Premiere League has also stayed away from using cigarettes as a sponsor, but now that I think of it, big banks like Barclay’s have probably done more harm to the world than Joe Camel…and Major League Baseball has maybe not actively promoted the use of chewing tobacco, but they certainly have glorified it…and all sports surely don’t think twice when it comes to taking money from alcohol manufacturers…

Okay what is this blog about? 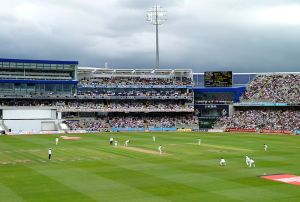 The ground was established the same year as Warwickshire and has been their home ever since.  It seats 25,000, the second highest capacity cricket ground in England, and is widely considered to be one of the nicest grounds in the country.

As seems to be the case for many  cricket stadiums in England, it recently went through a major renovation with an entirely new stand built in 2010, which required the demolition of parts of the ground that had been in place since the 1890s.  I am all for progress, mind you, and I know cricket clubs are businesses that need to compete with forms of entertainment not even imagined 20 years ago, but hopefully they also understand that their long and storied history is part of their equity, part of their selling point…it’s not all corporate boxes and Fosters.

Finally, as you know, rain is a big top of discussion here at Limited Overs, and Edgbaston, interestingly enough, had the fewest minutes of play disrupted by rain between 1979 and 1988, with 90.  (Old Trafford had the most: with 480. Ouch.)

Wikipedia’s source for the above stat was this book:  Rain Stops Play.  Looks like an interesting read!

Warwickshire’s greatest all rounder was (and still is) Frank Foster.  He captained the club during its first County Championship winning season (1911).   However, he only played in 159 first class matches for the club, as a motorcycle accident while on military duty during World War One prematurely ended his career when he was only 25 years old.   During his far too short career for the club, he did take 717 wickets and scored 6,548 runs.

Brian Lara is perhaps Warwickshire’s most famous player, helping the team to its back to back titles in 1994 and 1995, as well as several one day titles (they even won a rare treble in 1994.)

The most first class runs?  Dennis Amiss (35,146).  Wickets?  Eric Hollies (2,201).   The latter has a stand named after him at Edgbaston, and based on his wiki page, he seems like a great guy to grab some pints with.

These days, the club features internationals such as Ian Bell, Shivnarine Chanderpaul, and Chris Woakes.

Oh, and of course, the incomparable Jonathan Trott is a Warwickshire Bear, as well.

Only two counties left to write about, tomorrow: Worcestershire, and then Monday, the mystery is solved.  And I mean SOLVED.