“When I was coming here from New York City, it was real cold. But it’s still summer here.” – Regina Spektor, introducing ‘Summer in the City’.

Tomorrow it will be August.

There’s still lots of summer left, of course. August and September and October and even parts of November are lovely in this part of the world. Dry, warm, calm. But they’re not summer. It’s getting dark earlier and earlier already. The other morning I was up at 6am and the sun hadn’t even come over the horizon yet. Fall is still around several corners, but it’s in the air.

Summers always pass us by these days, like water through our hands. It is early June and it’s light out until 10 p.m. and then you blink and it’s August and there’s a chill in the early twilight. And you can’t help but wonder: where did summer go? Where do all the summers go?

I think this is because the summers of adulthood cannot compare with the summers of our youth, when days and months stretched on forever, and the skies were always blue, and there were lightning bugs and ice cream and it felt like fall was a million years away.

One such summer that stands out above all of the others is the summer of 1986. We were living in upstate New York in a little suburb with a downtown near the Erie canal. There were bike rides and forts in the woods behind the house and sunsets that seemed to last forever. The sun was so bright all summer that it almost hurts to think about. “A time of innocence” is a line from an otherwise very sad song, but it works here like no other.

Every day that summer I would play a game of baseball with one of the older kids in the neighborhood, Mark. Mark was special. He could do long division in his head. Everything he said made you laugh. A big mop of black hair underneath a blue Mets cap. It would be just the two of us, with ghost runners and a whiffle ball. Mark would always be the Mets, and I would be some other random Major League Baseball team. Mark won every single time, but I didn’t care, and he didn’t care. It was summer and we were young and there was baseball, always baseball.

Mark loved the Mets. That young, swashbuckling bunch of hard partying outsiders. Gooden, Strawberry, Dykstra. They were one helluva baseball team that year.

In August a “for-sale” sign went up in our yard. Mark and I never talked about it. We just played baseball. Talked about baseball. In September a truck pulled up and movers loaded up our things and we were gone. Mark and I never saw each other again, though a week has not gone by where I don’t think about the lifelong friendship that might have been.

That same October the Mets won the World Series. A year later we moved again. A year after that my dad died. And that was that. I never got a summer again.

In their review of the new Taylor Swift record, Pitchfork talks about how Swift knows she’s had better summers than this one, that we all have, but that she, like all of us, has a hope that better summers are still yet to come. I don’t think that’s true. I think our best summers have passed us by, they exist in the ether of the long past, of childhood and loss. We won’t get those summers back.

Yes, this summer is different, harder, sadder. But virus or no virus, it wouldn’t be the summer we had hoped for, the kind of a summer we remember.

Summer in England in 1986 brought a County Championship won by Essex again. And tours from New Zealand (two ODIs and three Tests) and India (same). England lost both Test series. There were no Twenty20s, fewer helmets, it was a different game almost, nearly unrecognizable to what see out there today.

No matter what, we weren’t going to see a summer like that again this summer.

But. The thing is. This summer is somehow, in so many ways, more like the summers of our youth, summers gone by. The only international cricket in England is Test cricket. There’s no T20 tournaments or rock music and there definitely isn’t The Hundred. And we are all a little bored, and the days go on forever, and the sun is out, and all there really is to do is ride our bikes around, and think about a future yet to be fully formed, but which we hope will be better. In that way, this summer is a bit of a gift, a reminder of those long gone summers of youth.

While it is important to see a silver lining in all this, it’s not worth it. It’s not worth the dead, the sick. And it never will be. So in that regard it’s just another summer of adulthood, full of worry, and the constant reminder that we will never have more than we have right now, as far as the people around us are concerned. All the comes next is loss.

But the past is important for one reason: we can’t change it. It is real, it is concrete, for good or for bad, that’s the reality of the times that have gone by. We will always have those unbroken summers of youth, those can’t be taken away from us. It can be impossible for our summers now to live up to those of our past, and that can create disappointment, disillusionment, but it doesn’t have to. Instead, we can take comfort in that while this summer has been awful, and our future summers will never eclipse that one summer when we were 11 years old and the whole world was alive with cicadas and baseball, at least we had that summer, at least we remember that summer, and nothing can take that away from us.

Life is change, and loss, and an emptying, but that is only because it started so full, for a time, at least for me. I watched the Mets win the 1986 World Series in the front room of my grandparents’ house in Pomeroy, Ohio. I thought of Mark, and that perfect — oh, just perfect — summer, and I always do now.

“Here comes Knight and the Mets win it,” was from game six, of course, but it’s the moment that stands out among all the rest. And even though it was deep into the fall, and you could see Roger Clemens’ breath has he prayed in the dugout, to me it was summer. 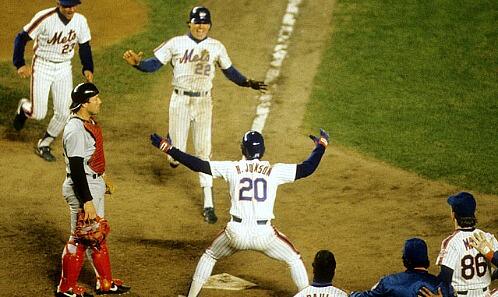