Most of the great cricketers that were active and in their prime when I first came across the game in 2007 have long since retired. Gilchrist, Tendulkar, Pietersen, Flintoff, Amla

Those that are still playing are long in the tooth and a little over the hill. They are paunched and their beards are graying and even though they are years younger than I am, they look already old, already fading away. It’s a stark reminder of time’s passing, the relentless march all of us are on toward old age, and all that comes with it. I am not young enough to call the men I watched play cricket 13 years ago heroes, that would be a misuse of the word, but if I were a child, that’s the term I would use, and we have all experienced the melancholic ache of watching once proud heroes disappear into the ether of old age.

When Stuart Broad was dropped before the first test against the West Indies, I thought he would join that sad parade of aging stars. People who just couldn’t play the way they used to, who had to fight for their spot in the starting XI, flailing like a raging Lear against time itself, doing all they can to push the sun back into the sky.

The difference with Broad of course is that he hasn’t seemed to have aged a day. He is still the lanky, blonde, baby faced kid we all watched come up through the system over a decade ago. When, say, Ponting was nearing the end of his career, he looked the part. But Broad didn’t. Neither did Cook. It just adds to the jarring nature of the passage of time. Like the old saying goes, a 50 year old is just a 30 year old who went to bed one night. One can be toiling along without a care, and along will come age and with it the whiplash message that you are old, that we are all old, that the world is no longer young, and that we have moved on along with it.

But we were wrong.

Broad isn’t over the hill. He isn’t used up, tapped out or a has been. He is a very much right now.

Over the course of the five days in Manchester, as we all know, he batted and bowled like it was 2013 all over again. Shaving seven years off like they were nothing, battling against time and, somehow, winning.

In that victory, we can all find hope. We can all be reminded that it’s never too late, that we all have not just one race left to run, but many races, and we are in with a shout at even winning a few of them.

Life is short, but it also very, very long. And because of that it can seem like life has passed us by long before it actually has. We are in the fight a lot longer than we think we are. Time is opportunity, time is chance, time is room for magic, and we have ample amounts of it. We can feel old, broken down, left for dead, but that doesn’t mean we are.

We are never guaranteed a tomorrow. But it’s still a pretty safe bet for most of us, and even if it’s not we can act like it is. And with that tomorrow comes hope. Comes the space to be better, be more. We have all watched our heroes burn out or fade away, but that’s not how it actually works. Even after the spotlight goes out, long after it does even, life carries on, and in that carrying comes joy. In Manchester over these last few days, Stuart Broad showed us a sliver of that hope, that while all of us have numbered days, those numbers stretch long into the future, and as long as we are still breathing, we can still fight. And still smile. And still win.

Stuart Broad took his first Test wicket in December of 2007. He was 21 years old. Life stretched out before him like an endless horizon. He was young, we were young, the whole world was young, Today in Manchester he took his 500th and 501st Test wickets. He is 34 and until five days ago it felt he was old, that we were all old. But today he feels forever young, in his prime, and somehow so does the whole world. 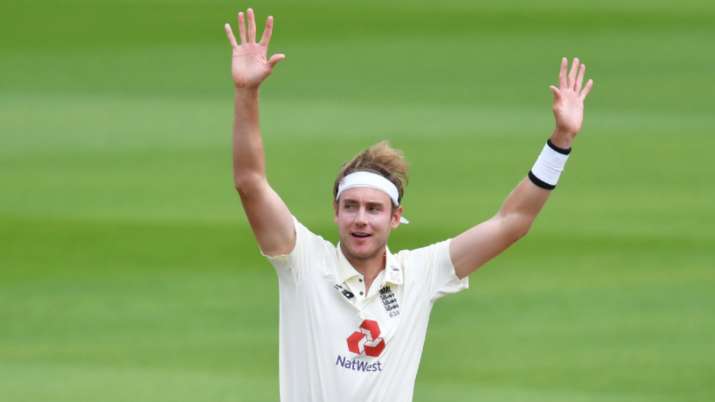