When they came to the place of which God had told him, Abraham built the altar there and laid the wood in order and bound Isaac his son and laid him on the altar, on top of the wood. — Book of Genesis, chapter 22, verse 9.

Despite its inclusion in the bible, and it’s long history among ancient societies, cremation was more or less obsolete by the 5th Century C.E. This was for the most part because of the spread of Christianity and their belief in life after death and the strict rites of the Christian burial.

By the Middle Ages, cremation wasn’t just shunned in Europe, it was illegal — and it stayed that way right up until the last couple of decades of the 19th Century, when attitudes started to change.

Which leads us to England in January, 1874, where Sir Henry Thompson called some folks over to his house on Wimpole Street in the Marylebone neighborhood of London — a 30 minute walk from Lord’s Cricket Ground — and together they formed The Cremation Society of England.

Their first step was to find out if cremation was legal in England or not, so Sir Henry and his society went to court and were told that cremation was not, technically, illegal. Sir Henry and his band of merry men then bought some land near the Great Northern Cemetery of London in Woking (not on consecrated ground, as was initially the plan until the Bishop of Rochester said nope, nope, nope) and built a furnace based on an Italian’s design and on March 17, 1879, they cremated a horse and it was a huge success.

The press ate all this up. Scandal! Intrigue! The Church! Modernity! Burning bodies, oh my! Human smoke in the air!

Now, the inhabitants of Woking didn’t want anything to do with breathing human body smoke — even though the horse produced very little, if any — and so the Home Office stepped in and said no more cremations until Parliament gave the thumbs up, and the Cremation Society’s furnace in Woking went dark.

Until 1882. When Captain Hanham of Dorset asked Sir Henry to cremate two of his family members. The Home Secretary, again, said no. More scandal. More press. And so Hanham built his own furnace and cremated the bodies of his wife and mother himself. Even more scandal. Even more press.

The following year a Dr. William Price attempted to cremate the body of his five month old son named Jesus Christ (Dr. Price was 83 years old in 1883 and claimed to be a Druid High Priest, just for context’s sake) and was arrested for trying and went to court. The resulting trial ended in Dr. Price’s favor, and Justice Stephen said that cremation was not illegal as long as you didn’t bug anyone. Today there are 291 operating crematories in the UK. And in 2017 there were 1.4 million cremations — more than half of all the deaths in the UK that year.

Two years before — in late August of 1882 — just as Captain Hanham was petitioning the Home Secretary — Australia beat England by seven runs at the Oval in London. It was a low scoring affair on a tricky wicket — in the first innings Australia only scored 63 in 80 overs. With two wickets left on the second day of the two day Test, England needed just seven runs with two wickets in hand but Harry Boyle got them both and the English crowd went deathly silent until, in true cricketing spirit, they stormed the field to congratulate the Aussie bowlers on their fine display. 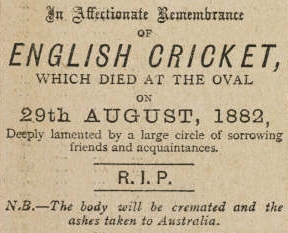 At the time cremation wasn’t legal. It was scandal. And so that was the joke. England were just bystanders; collateral damage. The Sporting Times was poking fun at the Home Secretary. And the Bishop of Rochester. And the Cremation Society. And Captain Hanham. And probably all those pearl clutchers in Woking.

Today in Birmingham, Australia’s openers trotted out for the first match of the 71st Ashes series, 145 years after Sir Henry Thompson and his Cremation Society were formed. There have been 330 Tests since the first official Ashes Series in 1882-3 in Australia. And it’s now considered the peak of Test cricket. It’s a summer’s long festival of the game, with a hype machine and packed houses. For the players, they are remembered for how they played in the Ashes more than anything else they do. It’s the granddaddy of cricket, and beloved not just in England and Australia but around the world. Every cricket fan everywhere woke up early today and watched. Because it’s the Ashes.

A butterfly flaps its wings in California, and a tornado is spawned in Texas. Sir Henry attended a conference in Vienna in 1873 where a crematory and the resulting ashes were on display, and today Steven Smith scored 144 to barge Australia back into the match. History is always happening.

One Reply to “From Sir Henry to Steven Smith: a history of cremation in England”