Yesterday, Russ of Idle Summers pointed out that test matches in Australia in the pre-war era were “timeless” – which is why of the 92 tests that took place between 1877 and 1940 in Australia, there were only two draws.

The post-war table for all test nations looks like this: 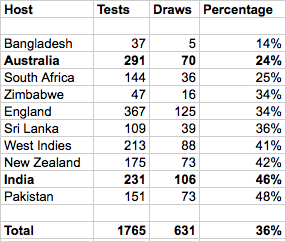 Australia are still near the top, just not as outrageously so. And I have yet to figure out what is going on in Bangladesh, but that is a blog topic for another day.

I found the notion of the timeless test match fascinating, and I must admit that I was unaware such a thing even existed until Russ pointed it out.

Between 1910 and 1932, South Africa played 10 timeless tests in Australia. They lost nine of them.

The only match the Saffers won before World War Two took place  January the 7th through the 13th, 1911, and was played at the Adelaide Oval.

The visitors won the toss on the opening Saturday and chose to bat. They ended the day at 279 for 5 .

Sunday was a rest day.

Australia bowled out South Africa on Monday, the 9th, for 482, and ended the day themselves at 72 for 1. On Tuesday they continued to bat on and on and on, thanks to Victor Trumper’s 204 not out.

Trumper, who would be dead of kidney disease in just four years time at the age of only 37, continued to bat on that Wednesday, and was the last man standing as the Australian tail fell apart, leaving Australia 17 runs short of South Africa’s first innings total at 465 all out, despite Trumper’s total of 214.

It was Trumper’s highest score ever, and quite unfortunate that came in a losing effort.

Wednesday’s play ended with South Africa at 232 for five in their second innings, and they would end their innings on Thursday at 360 all out, thanks in most part to a lovely century from Aubrey Faulkner, who would commit suicide in 1930 at the age of just 48.

Thursday (day five, mind you) ended with Australia at 187 for four and in modern times, the match would have ended right there in a draw, but since it was a timeless test, they came out to play again on Friday the 13th, and South Africa bowled out the hosts for 339, leaving them 38 runs short of the visitor’s total.

Reggie Schwarz took three of Australia’s final four wickets, two as a bowler and two in the field, to end with figures of 4 for 48. South Africa went on to win despite Tibby Cotter’s valiant 36 off of 28 at the death.

Schwarz died at the age of only 43, of Spanish Influenza on the Western Front in 1918; just seven days before the Armistice…

Cotter died when he was only 33; a member of the Australian Light Horse, he was killed by a sniper outside of Beersheba, Pakistan, in 1917.

A lot of tragedy happened to the stars of that match at Adelaide in 1911, the only timeless test South Africa ever won on Australian soil.

Of course, those were different times, life expectancy for men was only 50 in 1911, and so dying at the age of 43, especially during the age of  mustard gas and pandemics, was not at all that strange, but very eery how all four men of the match (unofficially) saw untimely and tragic ends.

Tonight, I drink to the memories of those four cricketers, and when Australia and South Africa take to the pitch in Adelaide this fall, I will do so again.