Unfortunately, I got a little bit of a late start this morning, and therefore cannot spend as much time as I would like discussing Kent County Cricket Club.

As I mentioned over on Twitter yesterday, I was doing a bit of reading on the club to get ready for today’s post and I was overwhelmed with their history.

First of all, according to some sources, the sport of cricket was invented in the area of Kent, in or around 1300 C.E.

Further, Kent played a side representing London in 1719 in what is widely held to be the first county cricket match.

However, getting a date for the actual birth of the club proved to be difficult, but it looks as the though the club as we know it today was formed around 1842, in Canterbury.  That was 18 years before Lincoln’s inauguration. Heck it was even a few years before the U.S.-Mexican War that preceded the U.S. Civil War.  I don’t mean to make this American blog all American-ey, but part of me really wants to put the County game into some sort of historical context.  These teams are old, folks.

In 1847, the club move to the St. Lawrence Ground, which has been their home ever since.

The ground holds 15,000, has been host to four One Day Internationals (most recently Australia v Bangladesh in 2005), and it is one of the oldest first class grounds in the world.

Also, um, there is a tree in the middle of the outfield:

Yes, a tree.  For the first 158 years of the ground’s existence, a lime tree was within the boundary.  Only four times in its history had the tree been cleared for a six.  Unfortunately, a wind storm and heartwood fungus spelled out the 200 year old tree’s demise, finally snapping in two in 2005 leaving only a stump.

A new tree has been planted within the boundary, but currently it is only six feet tall.

Kent has won the County Championship seven times, most recently in 1978.  They also shared the title in 1977, and won three Benson & Hedges Cups in that decade, as well.

Frank Woolley is probably their most famous player, and probably the greatest all-rounder England has ever produced, scoring almost 60,000 runs for the side, while also taking over 2,000 wickets, and making over 1,000 catches.  He retired from cricket in 1938 at the age of 51.

Of course, the County Championship was not held due to World War II between 1939 and1945, so I like to think he would have kept on playing if not for the war.

Finally, and most importantly, Mick Jagger is a fan of Kent County Cricket Club. 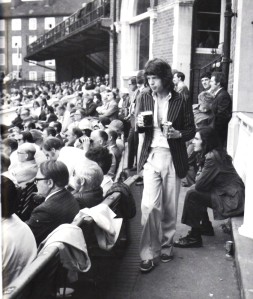 Other celebrity fans?  Still having a hard time tracking those down.

Postscript: There is one other first class cricket ground with a tree growing within the boundary line: the Pietermaritzburg City Oval in South Africa:

It even hosted a couple matches during the 2003 World Cup, India v Namibia (India won by 181 runs, Tendulkar and Ganguly hit centuries) and Bangladesh v Sri Lanka (Sri Lanka won by 10 wickets after bowling out Bangladesh in 31 overs.)

Back on the pitch: This morning India forced the follow-on and beat the West Indies by an innings and 15 runs.  While in Johannesburg, South Africa and Australia are on in the middle of an innings break on day one of the final test of the tour.  South Africa chose to bat and are all out for 266.  There is talk of bad light, so that might be it for today.