For the most part, I fly pretty far under the pop culture radar. Rarely am I plugged in to whatever is happening in the zeitgeist these days. Occasionally I will watch the “it” show on HBO or Netflix, but for the most part the entertainment I choose is not of the mainstream. And it’s become a point of pride, to the chagrin of many. I like to make it abundantly — painfully — clear that I have no idea what happened on The Bachelor and never will, which I know can be really damn annoying. People just like to have fun.

And so while I knew that there was a live action version of Cats, the Musical, hitting theaters, I also knew it was something that would never enter my insular little world even in the most remote manner. It would never even touch me. It would exist completely outside my bubble and then it would be gone. But I was wrong. The other day on Twitter someone posted a minute long clip of the movie on Twitter.

Because it was the most horrifyingly awful thing I have ever experienced.

This is what we have become. This is what our movies have become. A once great art form has been reduced to this. Whatever this is. The same city that brought us The Godfather and Deer Hunger is bringing us this terrible nonsense schlock. It’s not almost heartbreaking, it is utterly heartbreaking.

My uncle Will is a huge movie buff. At least he used to be. I honestly am not sure if he is anymore, so I will talk about his love for movies in the past tense, despite the fact that he is very much alive. He used to see everything. He would go to the theater all the time, and watch anything he couldn’t make it to on cable or via VHS from the video store. He loved movies. He told me once that he didn’t think he had ever seen a movie that he didn’t like. All movies were good. All movies had redeeming value in one form or another. You just had to look a little harder for it sometimes. I remember when Titanic came out and it was roundly poo-pooed by critics and pseudo-intellectuals (like myself) because it wasn’t, you know, smart. He said that if you don’t like Titanic, then you don’t like movies. I have ascribed to that theory ever since he said it to me. It was okay to like movies that weren’t smart, because all movies were good, in their own little way.

I don’t know if that is true anymore.

First run theaters are overgrown with crap like Cats and bad sequels and reboots and remakes and an endless stream of movies based on comic books. It’s like the entire industry has lost its soul. Movies aren’t good anymore not just because they aren’t fun anymore, but also because they are all the same. It’s disheartening. And it only seems to be getting worse. The classic cinema of the 70s is gone forever, we have known that for a long time. But now I am even nostalgic for 90s film, or early 00s. That’s how far movies have slipped away.

The parallels to cricket here are rather obvious. A once glorious game stripped down into nothing but a slick, vapid capitalist nightmare. Once The Hundred takes over we will long for the early days of the IPL. You think I am kidding, but I am not. And you know it. You read James Morgan’s blog just like I do. The ECB is obliterating England’s red ball domestic game and that might be the final nail in the coffin of the world’s most beloved format. It can’t help but make one feel almost intolerably sad, full of bottomless melancholy, as the world moves on and away from what was once great, and will never be again.

In movies, there is hope. Millions of people took three and a half hours out of a recent Saturday to watch Scorsese’s brilliant work of art, The Irishman. In the past year, I have seen movies at art house theaters and museums that have blown me out of the water. The Last Black Man in San Francisco. Honeyland. Long Day’s Journey into Night. They are not reminiscent of what was, they are not people trying to make Pulp Fiction for 2019, but rather people finding new and amazing and interesting ways in which to tell stories using film as a medium.

Hollywood’s soul might be black and dead. But movies are still very much alive.

Is the same true for cricket?

It can be hard to tell. There’s no such thing as arthouse cricket. All cricket is either mainstream or so far outside the system it can be hard to even know it exists. Is Ben Stokes winning SPOTY cricket’s equivalent of a beautiful movie about beekeepers in Macedonia? Probably not. Moments of brilliance on cricket’s biggest stage are salves for what ails the game, but not cures. No, the cure is somewhere else, somewhere hidden, somewhere hard to find. It won’t be easy to find. It will take work. And I don’t even know where to start looking, But I know it’s out there. Too many smart people have loved this game for too long for it not to exist. Soul’s don’t die. Not even cricket’s.

Somewhere, out there, someone is turning cricket not into a bad carbon copy of its glory years, awash in pointless nostalgia, and not at all into the mainstream sugar soda corporate cricket we see everywhere, but instead into something new but also familiar, and somehow difficult and challenging and beautiful. It’s out there. Let’s find it together. Let’s find cricket’s equivalent of the protagonist of The Last Black Man in San Francisco, skateboarding switchbacks across street car tracks down the hills of America’s greatest city cut into the rocky shoreline overlooking a bay in the fog.

This might all sound crazy. But today I have hope for this game. And I am going to lean into that hope. And when I read about The Hundred, I am going to think of this: 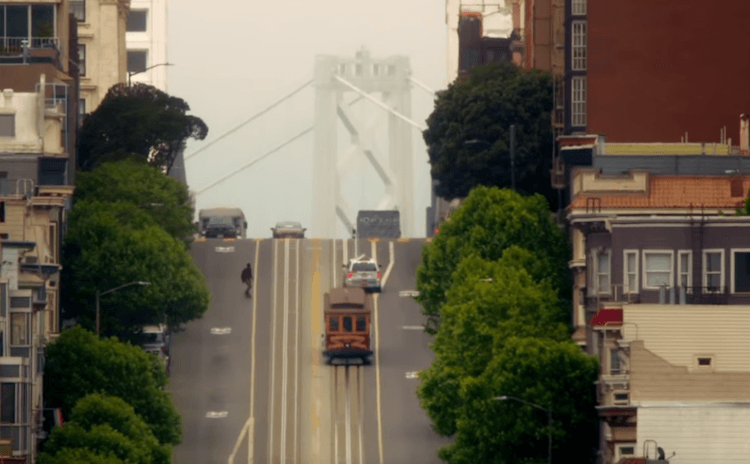 If the soulless movie industry can make that out of the hellscape that is Hollywood, then cricket can do it too.