It’s a real mess. It whips by us when we aren’t even looking and before we know it weeks, months, years, decades have passed. And what do we have to show for them? A great deal, usually, if we allow ourselves to see it all. But sometimes that can be difficult, and so all we see instead is life passing us by. Not slowly, either, but like a freight train, barreling down some distant track until it disappears in the distance.

I’ve often written how sport is wonderful as it’s something we can all mark time by. Especially sporting events that don’t take place every year, but every four years, like the Olympics or World Cups. We watch the games and the matches and we think about where we were four years prior, and where we will be at the next World Cup or Olympics, four years down those aforementioned railroad tracks.

The Cricket World Cup takes place next summer in England, which means it will have been 12 years since the first Cricket World Cup I paid attention to, 2007 in the West Indies. A laughable tournament but one that caught my attention and held it square. 12 years was a very, very long time ago, but it also of course feels like yesterday, like I went to sleep one night as a 31 year old kid and woke up a 43 year old old man. I remember watching England and India crash out, I remember watching Malinga rip through the death overs like death itself, I remember a crushing Australia win in the final, Ponting and Gilchrist batting on and on and on, the latter supposedly with a squash ball in his glove, and the Sri Lankan fielders complaining about them trodding on the wicket, and the farcical ending via Duckworth/Lewis. A farcical ending to a farcical World Cup, but one that I remember with great joy and nostalgia.

Then we all blinked and it was 2011 and we were all watching India lift the Cup in Mumbai. It was less a victory than a coronation. That’s not to say that they didn’t deserve the win, that they didn’t grind out the Ws against good teams, but from the opening ball to the last over, you could just feel it was India’s tournament to lose. God smiled on them, and Sachin smiled back. As did the whole of India. That was seven years ago. Seven. I hadn’t even started this blog yet. Obama was still in his first term. The world was still reeling from the global recession. We all looked back as India lifted the Cup and thought about 2007,  about all that had happened and the time that had passed us by, and we looked ahead to 2015, and Australia-New Zealand, and all that potential, all of that time, all of that potential for something magical to happen in our lives.

Of course, it didn’t. And, of course, it did. Four years is a long time. The years between the final at the Wankhede and Australia’s defeat of New Zealand at the MCG produced a lot of everything and a lot of nothing. I watched that final at my kitchen table on my laptop with bottles of New Zealand’s MOA beer. And I thought about all that happened in the last four years, and during some overs it felt like life had finally started to happen for me and during other overs it felt like nothing at all had happened, that I had just spent the four years twiddling my thumbs, listening to my arteries harden, having perhaps one or two too many hangovers. Both are true. Neither is true.

And now we are all waiting for the calendar to turn over to 2019 and have it be summer in England and Wales. I will watch the matches and think back to 2015 and 2011 and 2007 and all of that potential for change and magic, and I will also feel old and worn down and wonder if it’s been worth it, about what I have to show for all those mornings I pried myself out of bed, all of that time that had passed me by.

Others though, people that have followed the game longer, will think back to the last time England hosted the World Cup: 1999. 20 years. 20 years of triumphs and little successes and hard days and time, time, time, ticking away mercilessly. They might have been children when the World Cup was last on English soil, now they are adults with mortgages and kids of their own. They will look back on those 20 years and wonder to themselves: where did it all go? Did I do okay? Am I all right? And hopefully they will look around and see positive answers to all those questions.

But even if they don’t, even if they see negatives, even if those are hard questions with harder answers, they are important questions, and important answers. We all should take a moment here and there and take stock, see where we are, where we are going. There are lots of mile markers in life that can provide that moment of reflection, but sport is a really good one, maybe the best one, because it exists outside our sphere, it is a shared experience, and so we can, unlike personal anniversaries or milestones, take comfort in the fact that millions of other people, the whole world over, are watching those closing ceremonies, those final few overs of the final, those few precious final seconds of stoppage time, and reflecting in the same way.

The world stops to watch the World Cup, and together we all pause, and look back, and look ahead. 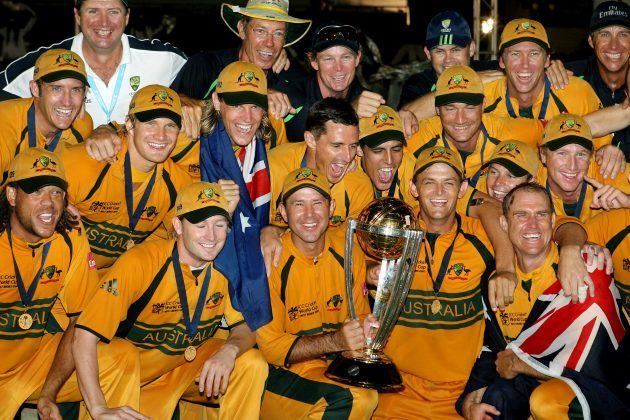