Australia were cruising to victory over Bangladesh in London today but the covers just came on and the players headed for the changing rooms. What a gift for England and New Zealand an abandoned match would be! And it looks like rain is going to continue off and on for the rest of the evening: 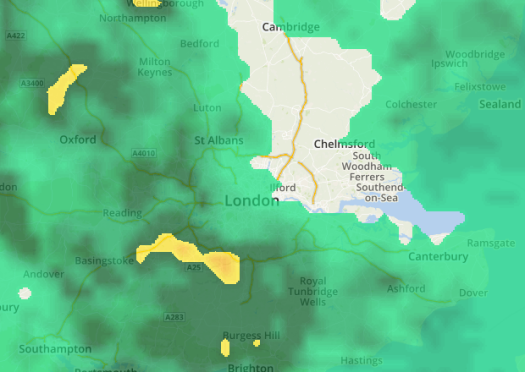 Australia and Bangladesh sharing a point would throw this group into turmoil. It would put England in command with two points and a game in hand, put Australia on two points with only one match left to play (against England) and New Zealand and Bangladesh would each have a point a piece. Tomorrow’s match between England and New Zealand is already a must win for both squads (more so for England, despite what Cricinfo says) and today’s rain adds even more implications to what is shaping to be THE match of the group stage. And the rain would mean that Australia would have to beat England to move on. Something that’s not impossible, of course, in fact most would give the edge to Australia, but it’s a still a tricky tie and a win is not guaranteed.

Oh, and the weather tomorrow in Cardiff? Rain in the morning then clearing after noon. Thank goodness.

There’s still talk of more cricket tonight in London, though, so I’ll stop counting my chickens. And even if the storm blows through and Australia hit whatever target they pull out of the Duckworth/Lewis hat, tomorrow is still set up to be an interesting day.

If the rain holds and Bangladesh get their (rather undeserved, frankly) point, then they could, potentially–very potentially–go through to the knock outs. It would take them beating New Zealand AND England beating Australia, and those are two very big asks. But still, it could happen. It won’t though, We all know that. If you ran New Zealand versus Bangladesh through a computer simulation, the Kiwis would win 99 out of 100 matches. They are simply the better side, and in cricket there just aren’t the giant killings you see in other sports (football, mainly). The better team wins in cricket. That’s just how it works. The games still need to played, of course, and in most cases who the better team is is not entirely certain, and when it is certain the margin is thin enough for other factors to come into play (the toss, the conditions, home field advantage). But not in this case.

I understand that, on merit, Bangladesh deserve to the be there. But I can’t help but wonder how much more competitive and entertaining this group would be if the West Indies were there instead of Bangladesh. As it is the three other teams can count on an almost a guaranteed two points. And that simply isn’t fair, to the group, the tournament and to Bangladesh.

We shouldn’t have a team needing to rely on rain in order to salvage points from matches. That’s no way to run a tournament.

But that’s neither here nor there. Bangladesh are in the tournament, and if it rains tomorrow in Cardiff, and in London on Friday, and on Saturday in Birmingham–three things not altogether unlikely–then this group could turn from being highly predictable to the opposite. In spades.

Ahh, June in the British Isles, what a time to hold a cricket tournament.