An interesting article from my former employer, MinnPost, on the affect the better understanding of concussions is having on the popularity of youth (gridiron) football.

According to a survey released Wednesday (but taken last July), most U.S. adults — 86 percent — are now aware that scientists have found a connection between concussions suffered on the gridiron and long-term brain injury.

And that knowledge, the survey also found, has left one in three Americans less likely to permit their sons to play football.

Some 13 percent said they absolutely wouldn’t let their child play the game.

In addition, 14 percent of the survey’s respondents said learning about the relationship between playing football and long-term brain injury has made watching the sport less enjoyable.

But it’s the changing attitudes among parents toward youth football that may, eventually, cause football to go the way of boxing and lose most of its large fan base. (Although difficult to imagine today, prizefighting was the most popular American spectator sport of the 1920s.)

Now, every sport has its problems with head injuries, not just football. Soccer, baseball, cricket. All of them. And I really don’t think the decline in popularity of boxing can be so easily explained.

But. Head injuries are a problem and none of the major professional sports leagues are doing anything about it.

The NFL is willing to let their sport die rather than make it safer.

And so this is an opportunity for the ICC: To become a global leader in making their sport safe for everyone: kids and adults alike.

I am not sure how to exactly go about doing that. But I do know two things for sure: 1.) For cricket to survive and grow, it needs to grow and cultivate the game at the youth level. And 2.) The backlash against head injuries is very, very real and is going to have a profound affect on youth sports. And so it follows that if cricket can be seen as the safe alternative to football and soccer for kids – the way soccer was in the 70s and 80s – then that could go very long way to not only ensuring the survival of the game, but also could serve to increase its global popularity.

The key of course is to make the game safer without taking the teeth out of what’s great about it.

Something for us all to think about.

Team sports are a huge part of growing up – and making cricket safe for kids could make it THE youth sport of the 21st century. In America, England, everywhere.

That’d be something, eh?

But based on what I found on ICC-Cricket.com, we have a lot of work to do: 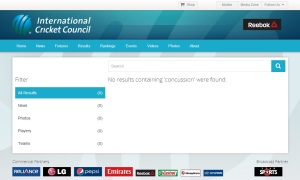