Acts of terrorism are not a fact of modern life. They are a fact of all human history.

Terrorists and terrorist cells have always been with us, and they will continue to be with us until the stars go out.

And terrorist attacks on athletes and sporting events will also be with us always.

The Sri Lankan cricket team in Pakistan; the Israeli Olympians in Munich; the Togolese footballers in Angola. The list goes on. Athletes are young, fit, vigorous, popular: perfect targets for those looking to inflict terror.

But the attack yesterday in Boston was not an attack on athletes. It was attack on people just like us, out for the day, enjoying the sun.

And that’s why, despite the fact that it was tenuously related to a sporting event, I don’t think I have anything to offer here on this cricket blog. If I had been writing this blog when Lahore, Munich, or Angola happened, I would put on my sportswriters hat and pen 1,000 words on athletes and youth and the meaning of sport in modern society, but that is not the case here.

In this case, I just feel sad. And a little distracted. But also full of hope for the human spirit, and humanity in general.

People ran toward the explosions to help their fellow citizens.

Sport can inspire at times, but nothing inspires quite like that.

I have a lot of international readers, and consider myself, for lack of a better phrase, a bit of a global citizen – and so I have to stop and think about the fact that bombings like we saw in Boston happen every day all over the world and ask myself why I do not write posts about the bombings yesterday in Iraq, for instance.

Here’s my best attempt at answering that: I think it is perfectly okay to react and mourn more viscerally when events such as yesterday’s attack happen close to home, because they are just that: close to home. But we also need to remember that every day of the year, in every corner of the globe, there is terror and sadness but also heroes running toward danger, not away from it; we must remember that while simultaneously doing whatever we can to advance the cause of justice in our neighborhoods and around the world, so we can avoid another Boston, another Omagh, another Oklahoma City, another Colombo…and our heroes won’t have to run into anymore fires.

Instead they can just play cricket.

Inspired by this – a speech which I borrowed heavily from for the above, and for that I apologize to Aaron Sorkin. Please think of it as nothing more than an homage.

Though I must say that I prefer the original version of the above song, the Tori Amos version really does work in the context.

I have been to Boston twice.

Both times I was stuck out at a trade show in the suburb of Medford.

But one time I took the train from the Alewife station down to Fenway Park for a Red Sox game. It was 10 July, 2004, the year they finally broke the “curse” and won the world series for the first time since 1918, so I like to take a least a little bit of credit for that.

I got down there early, had some beers, walked around, soaked it all in, and enjoyed a rock ’em, sock ’em 14-6 win for the home team over the Texas Rangers.

Despite the fact that driving there is a nightmare, despite the fact that the people, while not entirely unfriendly, have a tendency to give you a little hell before giving you directions or holding the train door for you, and despite the fact that June can be more dismal there, weather wise, then even San Francisco…despite all of that: I loved Boston. And while it breaks my heart to see it hurting, I now that if there is any major city built to withstand a terrorist attack, is it Boston.

Thanks for indulging me. Tomorrow: more cricket. 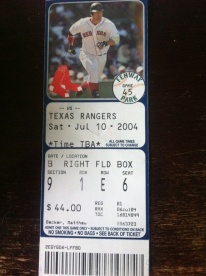