The structure for this post comes from an article written for the website I work at (MinnPost.com) by the incomparable David Brauer (on Twitter at @brauer) that ranks all of the local Twin Cities media members and organizations by number of Twitter followers – but the inspiration came from the Cricket Ireland Facebook page and the jaw-droppingly low number of “likes” it has (less than 9,000), despite the fact that Jarrod Kimber urged all his readers to go like it a few months back.

So I decided to take David’s idea and move it into the world of Cricket, but include Facebook and the number of overall Tweets – plus a new stat (hey this is cricket) that I “invented” (maybe) called “Tweets per follower” (TPF) – which is simply the number of followers divided by the number of Tweets. The lower the number, the more effective one’s Tweets are…kind of…It’s not science by any means, and does not account for existing popularity (the BPL vs the IPL, for instance), but I think it gives us a general idea as to the effectiveness of each organization’s Social Media manager, surely.

For instance, the English Cricket Board’s TPF is .05 – which means they earn 20 followers for each and every Tweet.

Tonight I am doing national boards for Test nations (with the exception of Zimbabwe, as they do not seem to have an official social media presence and I get a malware warning when I try to go to their official site – I also added Ireland since they were the impetus for this project) – in a later posts I will do the same thing for clubs, leagues, media organizations, associate nation boards, cricketers past and present, journalists, bloggers…etc. It should be fun.

India is the winner by a million miles. Of course, cricket is wildly popular there, more so than any other sport, and they do have 1.2 billion people, so that’s not too much of a surprise. The only real surprise here is Australia and South Africa ahead of England – in fact Australia has nearly three times that of England – everything else is down to population and popularity of the sport; as well as, quite simply, access to the Internet. 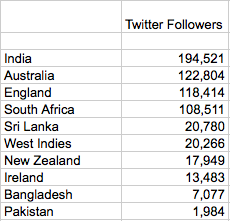 Again, India takes it, with Australia a close second. England and South Africa have flip flopped. Meanwhile Bangladesh and Pakistan have fallen off the map, while Sri Lanka, New Zealand, and the West Indies move up.

The fact that Ireland has more Twitter followers than Bangladesh and Pakistan combined is an interesting fact, though again probably easily explained away with a discussion of Internet access.

Interestingly enough, the list does not simply follow GDP ranking – Sri Lanka is ahead of New Zealand for instance. So while Internet access is a qualifier, it is not THE qualifier.

Tweets and Tweets per Follower:

Since this a newly invented stat, it is tough to tell what is good and what is not. For the purposes of this exercise, I am going to say that anything under .2 is good.

As you can see, the West Indies Tweet A LOT, but it takes more than a Tweet and a half for them to gain a follower – meanwhile England is racking up followers at the rate of 20 per Tweet.

England, India, Australia, and New Zealand all seem to be maintaining effective Twitter campaigns – but despite England’s phenomenal FPT of .05, I think the winner here has to go to India – almost 200,000 followers and an FPT of .08.

And considering their immense following on Facebook, I would have to say that despite their sizable population (not to mention their growing and thriving diaspora), and the immense popularity of the sport in their country, India is the clear winner overall in this exercise.

On a side note, the generic Facebook page for cricket has 15,823,390 likes. I am going to go ahead and surmise that that is about the number of active cricket fans alive in the world today.

Edit: this was meant as a joke, but it got some play on Twitter, so I am going to provide a better stat: there are supposedly 1 billion Facebook users among the nearly seven billion people on planet earth. So the number of Facebook likes above represents roughly 1/7 of the world’s cricket fans – putting the revised guesstimate at around 105,000,000 active cricket fans.

I mentioned it in passing above, but none of this takes into account Internet access, economic stability…etc. And for the most part, I am going to have to leave that out of consideration. I am not a global economist; nor am I an expert on international Internet access or censorship.

I will point to this wiki page for information on that subject, and leave you with this thought: this is supposed to be for fun.

Where possible however, I will use percentages and per capita stats in order to level the playing field.

Lots brewing here at Limited Overs. Keep an eye out for more posts in the social media series, some more stuff about World War One, a post about Cricket Ireland and the Irish Troubles, and finally, a bit about the DMCA removal notice I received this afternoon.