It has been a few days since Ricky Ponting announced his retirement from Test cricket. In the age of the 24 hour news cycle, this is not just old news, but positively ancient – and really everything that had to be said about it has been said already – and better (here’s my favorite from A Cricketing View) – but I thought I would take a few minutes and add my own two cents to the mix anyway.

I have never really been a Ponting guy. Though I freely admit that this is probably because I am a Johnny-come-lately to the sport – I started following the game just as his peak years were ending. I always wanted to like him, though. He had superior leadership qualities, and in this day and age of million dollar mercenary cricketers devoid of any and all loyalties, it seemed all he really wanted was for Australia to win every single match – and so as he aged, and his skills diminished, you could see the frustration in his eyes. You could see him questioning his place in the team with each flail of the bat, and you could see him still try and shoulder all of the load, despite the fact that his team was ready to move on without him.

All of the above gave him qualities that were very much, well, human.

Our sport stars so often transcend humanity – both in their athletics as well as their emotions. They can come off as robotic, as superheroes, as bigger than all of us combined, yet despite Ponting’s incredible batting prowess – 13,370 Test runs, the second most of all time – he had this human quality that always endeared him to me.

When his struggles were at their zenith last summer in the Test series against New Zealand and India, someone on Twitter compared him to King Lear: old Lear, dying Lear, raging Lear.

Lear, the old King, who died overwhelmed by the trials of life:

“You must bear with me:
Pray you now, forget and forgive: I am old and foolish.”

Only in this version of the play, Lear has one last chance to redeem himself, and I am hoping he does. It would not be a Shakespearean tragedy, but a Hollywood ending, if he could score a double century on the way to a famous Australian series victory.

Walking out to the crease, one last time, under the same Western Australian expanse of blue where it all started 17 years ago, pushing the sun back into the sky, and giving us all one more day of summer… 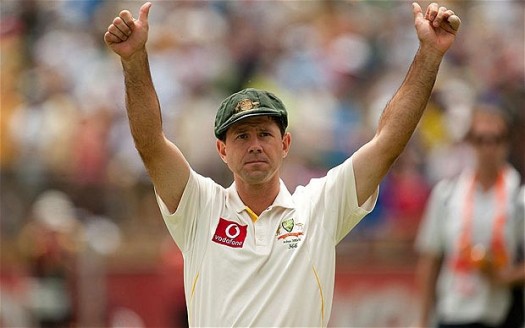 I also would like to take this opportunity to welcome all my new readers, and to thank everyone for the amazing response to my recent post about cricket blogging. It was without a doubt the best day I have had in a real long time. Thank you.