Yesterday this blog received its most impressions ever in one day – the total was nearly five times my normal daily traffic, and more than double the old record. But what was driving it all is a complete mystery.

This is what I do know:

– The vast majority of the visitors were from the United States

That’s it. That’s all WordPress Stats can tell me. No referrers, nothing.

And what’s weird is that I have not posted since Tuesday. Hell I did not even tweet yesterday.

I am blogging about this because if you, dear reader, know where the traffic all came from, please let me know in the comments. Please. Seriously. The mystery is killing me.

And speaking of mysteries:

Today I tuned into Willow.TV hoping to watch some of the first ODI between England and South Africa, but instead I saw rain. And so I switched over to ESPN3 for the Sri Lanka Premiere League. The match was a group stage game between Wayamba United and Kandurata Warriors.

I must say, it was a joy to watch. The cricket was not the best in the world, but it was joyful, loose, and entertaining all the same. United sliced through the Warriors’ openers, leaving them at one stage 14-3. But an 80 off of 51 for the shockingly odd looking Australian, Chris Lynn, gave the Warriors hope, setting a target of 150 for United to chase…which they couldn’t do; falling two runs short.

I hope to watch more SLPL in the future. The knockout stages start on August 28th and the final is on August 31st. Considering today is the 24th, probably a good thing I tuned in when I did, otherwise I might have missed the whole thing.

And speaking of domestic T20 competitions, the semi-finals and the final of the Friends Life T20 is on August 25th in Cardiff. Sussex versus Yorkshire in the first semi-final, and Hampshire versus Somerset in the second. The possibility of rain notwithstanding, it should be a great day of cricket. Unfortunately, I will not be able to watch it, because Willow TV is not showing any county cricket whatsoever this summer.

And speaking of cricket I cannot watch, the new-look India is playing New Zealand in a test match at Hyderabad. And, again, I have been unable to watch. Now I freely admit that the main reason I cannot watch this match is the time difference. However, I cannot stress enough how unfortunate it is that it is not available for legal streaming here in the states. Someone, somewhere, is missing out on a fantastic business opportunity. Willow TV could double their subscribers over night. Heck they might even make enough dough to finally update their website. And personally, I love watching test cricket on the subcontinent, but with the exception of Bangladesh, I never, ever get to watch it. Ever.

*UPDATE*: Cheers to Devanshu from Deep Backward Point for letting me know that India versus New Zealand is on Willow TV. Huzzah!

*FURTHER UPDATE*: According to their website, Willow TV is going to be showing the following series:

New Zealand in India, Indian domestic cricket, England in India (!!!), Pakistan in India, and Australia in India, on top of all the other cricket they already show. Fantastic!

And gosh were they planning on telling anyone?

I posted this blog at 3:05 central time. I received an e-mail at 3:39 central time from Willow announcing the changes.

On the pitch however, the post-Dravid and post-VVS India are looking more than just okay against a weakened New Zealand side. Despite the fact that England have fallen off as of late, I am still excited to see what they can muster against these young Indian cricketers this fall.

And speaking of cricket I can watch: I found out two days ago that the entire ICC World Twenty20 will be available live here in the states on ESPN3. Every ball. Free. On the Internet. Lovely. 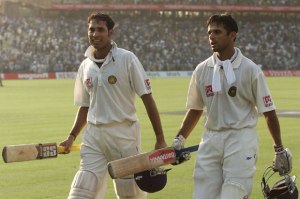 2 Replies to “Speaking of…”