Yes, I know, this is a cricket blog…bear with me…

There is so much happening right now. In sport. In cricket. In real life. My 10th wedding anniversary was Friday. The next night my wife released her second album. On Sunday I woke up on a boat. On August 21st, I graduate. There is also the second test between England and South Africa happening right now, and despite the rain it has been a truly brilliant game. Kevin Pietersen’s knock on Saturday was easily the most entertaining century I have ever seen, though I freely admit my experience is limited. And now with 40 overs left on the fifth day South Africa have declared 252 runs ahead and Strauss has sent KP out to open with Cook and so both captains look to be going for the win. Wonderful stuff. Ebbing, flowing, drama: Test Cricket.

And through everything, the Olympics have been happening.

I have not watched as much as I would have liked. I have been busy (see above), and I am cable-less at the house and NBC’s flagship coverage has been dreadful. Nothing but beach volleyball and water polo. Where’s the team handball and the judo and the fencing? And the football and the field hockey and the discus? Oh, right, Americans are not good at those events, and so NBC assumes I am not interested.

And this all brings to mind my ongoing issue with all the Olympics: all of the bloody Nationalism. If I had my way, the IOC would do away with all of the medal counts and national anthems and patriotic brouhaha and just have the best athletes in the world get together every four years and compete. Sure, there would be logistical concerns, and team sports would of course be a concern, but there is no reason why the Olympics can’t be treated like, say, a grand slam tennis tournament, for instance. Just invite the best athletes via a points qualification system. People can still of course cheer for their country men and women, like the Brits did for Murray during Wimbledon, but stripped of the competition will be all the obsolete and divisive patriotic bullshit. I mean, seriously, who cares if the USA wins more medals overall than China? And just because an athlete happens to be American, why does that mean I am more interested in their performance, or more excited if they win?

It would be so much more Olympic.

Mo Farah’s win the in 10,000 meters on Saturday night was easily, EASILY, the highlight of the Olympics for me so far. Not Gabby Douglas, not Micheal Phelps. Shoot, Farah’s win will probably make my top five sporting moments of 2012. It was an absolutely brilliant 20 minutes of sport. There was drama, courage, joy. Everything we all love about athletics. My wife and I were both off the couch and standing with nerves as the bell lap started. Inside a cauldron of light and noise, Farah went ahead with 450 meters to go and held off the finest class of distance runners the world has ever seen. He crossed the finish line and collapsed from joy and exhaustion. It was a brilliant moment. I have not stopped thinking about it. The way a good film or concert sticks with you for days.

Mo Farah: a British citizen who was born in Somalia and trains in Oregon.

Thank you, Mo, for proving my point for me. 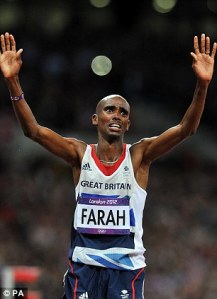 My friend Tim over at 7amkickoff points out that Mo is an Arsenal supporter, among other revelations.

And Mike Marqusee discusses the ultimate Olympic gesture, and points out that the medal counts are an invention of the media.

One Reply to “Athletes Without Borders”