As we all know, the first test match ever featured Australia versus England and was held at the Melbourne Cricket Ground on March 15th, 16th, 17th, and 19th, 1877. (Beware the Ides of March).

Of course, it was not called a test match, and it was not even technically Australia versus England, as neither side contained their nations’ best players (it was a 48 day boat trip from England to Australia at the time, which accounted for the poor English side). But today it is known as the very first of the 2000+ test matches we have all enjoyed over the last 135 years.

Australia won the toss and chose to bat, scoring 245 all out, thanks to Charles Bannerman’s 165. England responded with a balanced 196.

In the second innings, Australia were all out for only 104, setting a target of 154 for England – which they did not achieve, losing the first ever test match to Australia by 45 runs.

Australia won the second match of that series by four wickets.

Six years later, there was the first Ashes series.

And the rest, as they say, is history.

At the time of the match, as I mentioned, it was a 48 day boat trip between the two countries. But also:

The match took place only 11 years on from the US Civil War, and the Indian Wars were raging in the American West, as was the Russo-Turkish War.

In 1877, the world population was only 1.5 billion – and Leo Tolstoy published Anna Karenina. The life expectancy was only 43.3 years, Thomas Edison invented the microphone, and the very first All England Tennis Championships were held in Wimbledon.

Also that year, French Realist, Gustav Courbet died on December the 31st. His work formed an important bridge to the Impressionists that would follow, and was a life long soldier for freedom and liberty:

“I am fifty years old and I have always lived in freedom; let me end my life free; when I am dead let this be said of me: ‘He belonged to no school, to no church, to no institution, to no academy, least of all to any régime except the régime of liberty.'”

And speaking of the Impressionists, theirs was the dominant movement in painting in 1877. In fact, that was the year the name “Impressionism” was first coined. They were the first movement to exhibit outside of the Salon, incredibly radical at the time, and in doing so changed art forever.

The third Impressionist exhibition opened 12 days after Kendall bowled out England, in a spacious apartment at 6 rue le Peletier in Paris. Cezanne, Degas, Monet, Pissarro, Renoir (among others) participated in the show.

And one of my favorite paintings of all time, Gustave Caillebotte’s Paris Street: A Rainy Day:

And his contemporary, Pierre-Auguste Renoir (self portrait): 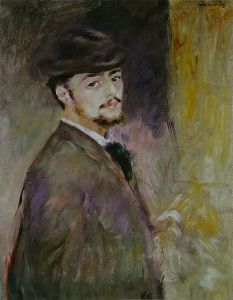 …both were changing their chosen passion forever, within days of each other, on opposite sides of the planet.

Now, I am not naive enough to think that Renoir knew of the cricket, or that Bannerman knew of the Impressionists, of course. But I always find it fascinating when two separate but equally important events coincide with each other on our global timeline. When the stars align, they align for all of us. Best to pay attention.

2 Replies to “A Match in Melbourne, an Exhibition in Paris”