Today’s topic: Jacques Kallis and The Theory of the All-Rounder.

First of all: Is he the best all-rounder of all time?

Let’s start from the batting side.

Here are the top ten test batsmen of all time, based on average runs scored, 100 innings minimum: 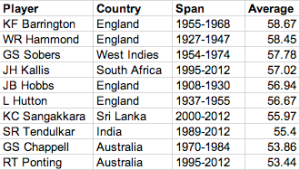 And here are the top test bowlers of all time, based on economy rate, 100 innings minimum

Kallis does not appear on both lists. Only Gary Sobers does, in fact, the man who most cricketing pundits considered the greatest all arounder of all time, before Kallis came along.

(One quick note on fielding statistics, I am going to ignore them for the most part, except in cases where a tie-breaker of sorts is needed. For the record however: Kallis has 180 test dismissals and counting, while Sobers retired with only 109…for whatever that’s worth).

Of course, Sobers retired from International cricket in 1974, and only played in one ODI, and no T20s. So once the short formats become part of the discussion, everything changes.

As such, I am hesitant to see what the numbers gives us, as I feel it might punish those that played in the pre-one-day era.

But for argument’s sake: 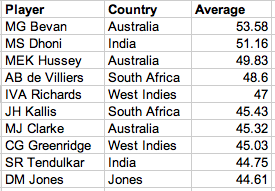 And the top ten ODI bowlers, based on economy rate, 100 innings minimum:

Not one player makes both lists. In fact, no one really comes close.

And I ran the numbers for wickets taken, strike rate, and average, and still no one came close.

One Day Internationals are just a different beast, it seems, for the all rounders.

Of course, Kallis still has a lot of cricket left in him (he has fantasies of playing all the way through the 2015 World Cup), but for now, Sir Gary Sobers is still the best all rounder cricket has ever seen.

But is he the best best cricketer ever?

Using the above information: yes, surely. He is top ten in batting and in bowling. He played for 20 years, and therefore his quality was proven over many years, on many grounds, against many teams.

And his team was, well, all right during his tenure, as well. Between 1954 and 1974, the West Indies played 23 test series, winning nine of them and drawing four.

So: greatest cricketer ever?

Sachin Tendulkar is the greatest cricketer ever. And he will retain that seat for the next 1,000 years.