Three Pakistanis have hit triples centuries in a test match.

There was Hanif Mohammad against the West Indies in 1958; Inzamam-ul-Haq versus New Zealand in 2002; and Younis Khan against Sri Lanka in 2009.

Mohammad’s knock came at the Kensington Oval in Bridgetown in the first match of a five test series. The match ended in a draw.

West Indies went on to win the next three tests to take the series.

The home squad had put up a massive score of 579 in their first innings, while restricting the visitors to 106, and forcing the follow on.

And then Mohammad stepped to the crease, and as I mentioned in my previous post: batted for a jaw dropping 970 minutes for 337 runs.  Carrying his bat through the innings as partner after partner fell.

Pakistan set a target of 185 for their hosts, but time ran out on day five after only handful of overs.

Cricinfo has a couple of photos that are worth checking out.

Herr Mohammad looks like the sort of cricketer I could get on board with, based simply on his picture. Just like The Nawab of Pataudi.

Unfortunately, as mentioned above, Pakistan had a poor showing in the series overall – as did Mohammad. He scored 337 runs in the innings, but only 628 in the entire series.

An aside: Sir Gabby Sobers also hit a triple century in the series: he scored 365 not out in the Windies’ first innings of the third test. His team went on to score 790/d and won the match by an innings and 174 runs.

Mohammad’s 337 is the highest ever for a Pakistani, and was broadcast live on the radio in Pakistan. This, according to Cricinfo, had a great deal to do with the popularizing of cricket in Pakistan.

He was a big man, who loathed exercise, but who attacked the ball with ferocity.

His triple century happened at Lahore Stadium (formerly the Gaddafi stadium, at least here on Limited Overs) against New Zealand on May the 2nd, 2002.

The knock came in the first innings, and Pakistan went on to win the match by an innings and a whopping 324 runs.

Imran Nazir also scored a century for Pakistan in the match, but he was the only other Pakistani to get into triple digits.  All the hosts needed was Inzamam.

Their bowling was spectacular in the match, getting New Zealand out for only 76 in their first innings, and only 246 in their second.

In the first innings, Shoaib Akhtar had remarkable figures of 8.2-4-11-6. While in the second innings, he did not bowl an over.

Danish Kaneria bowled 32 of them, however. He was expensive, allowing 110 runs, but he also took six Kiwi wickets.

Unfortunately, the series is better known for the tragedy that preceded the second test in the series.

On May 8th, outside of the Sheraton Hotel in Karachi, where the teams were staying, a man detonated a car bomb near a city bus: killing himself and thirteen others.

The teams were minutes away from boarding their busses for the stadium.

Younis Khan scored it for his country in the first innings after Sri Lanka put up a superb score of 644.

Pakistan went on to score 765 in their innings, thanks mainly to Khan’s 313, and the match ended in a draw.

It was a marvelous innings for Khan, his first as Pakistan’s captain, and propelled him into the number one slot in the ICC Player Rankings.

Unfortunately, again, the test preceded a tragedy: two weeks later in Lahore, gunmen attacked the Sri Lankan team bus, and Pakistan has not hosted an international match since.

Nor will they in all likelihood ever host one again – at least not in my lifetime.

I decided to write about the three triple centuries because in some ways, for me, with one major exception which I will get to in a minute, they sum up Pakistani cricket.

Incredibly talented, yet beset by tragedy over and over again.

Two of their biggest moments ever: overshadowed within days by terrible moments in their nation’s history.

They will be my team, going forward, I have decided.

I like that the are controversial, that they soldier on in the face of adversity, that they entertain…

And sometimes they even win.

More on those tomorrow.

And speaking of Pakistan:

Back on the pitch: their first ODI against England begins at 5am Minneapolis time tomorrow morning. I am very much looking forward to it.

Also: congrats to Dhoni and India for their win yesterday at the Adelaide Oval. A special victory from a special Captain.

As I mentioned before on this blog: I love it when Captains step up and drag their team over the line. It might just be my favorite thing in sport.

And finally, Ireland is playing Kenya in a four-day ICC Intercontinental March. They were 75 all out in their first innings but restricted their hosts to 109. Currently they are 81 for two in their second innings at the close of day one.

It should be a fun day tomorrow at Mombasa.

Which brings up our geography lesson: 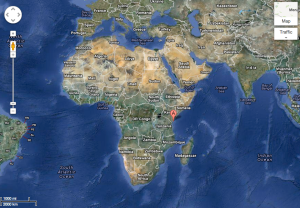