There have been 2,032 Test matches since Australia first hosted England at the Melbourne Cricket Ground in 1877.

Those 2,032 matches have been played at 106 different grounds.

My original plan was to write about each and every one of them – one post each, make it a twice-a-week feature, but this morning I had second thoughts.

I have written about a lot of these grounds already. In fact, the first half dozen or so have been beaten to death not only on this blog, but in blogs and articles and books the world over for the last 125 years. The MCG, the SCG, Old Trafford, Lord’s…etc. What else could I possibly say about those grounds?

It would be 106 filler posts, all in the same format: Test history, domestic teams, weather, pitch…etc. Not exactly page turning material. I am much better off saving those posts for topical grounds, i.e. grounds that are featuring a current match. Like when I wrote about Napier Park last week.

But in order for this blog to survive, I am going to need to get creative with the topics, as I just do not have the analytical chops to write thoughtful 1,000 word posts on cricket’s guts five days a week.

So I am going to start doing week long features (sometimes a full week, sometimes a little longer) along with my daily updates and rants and opinions on the current happenings in world cricket.

Getting to 200 in a cricket match is a feat worth celebrating, but so is getting to 199 in a cricket match, but unfortunately those 199s do not provide the player with a standing ovation, an opporunitity to raise their bat to the crowd, a moment in the spotlight. Instead, we just all feel a little bad for them – one single short of history of a milestone…

Over the next week, we will explore each of Test cricket’s 199s.

There have been eight of them. The first one did not happen until 1984, which really is shocking when you think about.

Specifically, it was October the 24th, 1984, and the knock was from Mudassar Nazar of Pakistan against India at the Iqbal stadium in Faisalabad, Pakistan.

The 199 happened in Pakistan’s first innings in the second test of the tour.  The match ended in a draw – as did the series, which ended with two draws, one no result, and two matches cancelled before a ball was bowled.

During the series, India’s Prime Minister, Mrs. Indira Ghandi, was assassinated by Sikh extremists, casting a real pall on the tour, and cancelling the final two matches.

Mudassar Nazar’s knock happened alongside two successful partnerships, 141 runs for the 1st wicket with Mohsin Kahn and 250 runs for the 2nd with Qasim Umar – who incidentally did end up with a double century.

Nazar batted for 555 minutes, Umar for 685 – 20 hours between the two of them. Not exactly Big Bash League stuff.

Over his long career, Mudassar played in 76 test matches for Pakistan, scoring 4,114 runs, including 10 centuries and, thankfully, one double century (14 Jan, 193, versus India at Hyderabad.) (Thankfully because it would be quite sad if 199 had been as close as he ever came to 200.)

After retiring, he coached the Kenyan national side, briefly, and is now working for the ICC inDubai.

Interestingly enough, Mudassar’s father, Nazar Mohammed, was also an opening test batsman forPakistan– and faced the first ball ever bowled against Pakistan in a test match at Delhi in 1952.

The match featuring Mudassar’s 199 was played at the Iqbal Stadium in Faisalabad, Pakistan. It has hosted 25 tests, the first against India in 1978 (drawn) and the most recent in 2006 versus India (also drawn.) 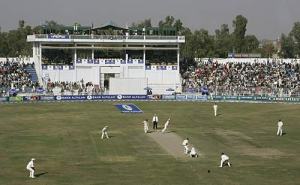 One final note, the five day match featured a rest day after day three – I guess these were quite common up until recently. I had no idea.

Tomorrow: another segment of 199.

Back on the pitch: England are having a much better day in Abu Dhabi, restricting Pakistan to 256 for seven on a bowler’s pitch thanks to three wickets each from Broad and Swann – and one from Monty Panesar!

And tonight: New Zealand v Zimbabwe– hopefully I will be able to put down Skyrim long enough to watch a little of it.