Sure, it’s only one test, but’s it worthy of a preview, as I have mentioned about 17 different times on the blog already, the match is going to be live on Willow TV at a very reasonable hour: first ball at 15:30.

This will be the eighth test match series between the hosts, New Zealand, and the minnows, Zimbabwe. New Zealand have won five of those series, the other three have been drawn.  In fact, New Zealand has never lost a test match to Zimbabwe; over their 14 head to head meetings, the Kiwis have won eight and drawn six – most recently beating them by 34 runs this past November at the Queens Sports Club, Bulawayo, Zimbabwe.

Nine of the matches have been played in Zimbabwe, only five in New Zealand, none at a neutral ground (it won’t be long until every head to head history will have to include a “neutral ground” category, so I am getting on board early: the U.A.E. will host an England v Australia ODI series within 10 years, you heard it hear first.)

The one test of this series will take place at the…

Okay, please do allow me to editorialize just for a second here: one test? ONE!?

I realize it is an abbreviated series overall (three ODIs, two T20s), but they couldn’t find room for one more test in the schedule?  Don’t the ICC and the cricket boards of New Zealand and Zimbabwe want their countries to improve at test cricket?

Maybe not, maybe the money is in the one-dayers, and maybe their cricket boards feel that either way, their domestic leagues do enough to develop cricketers who excel in the long form of the game, but I just don’t know…

One test feels wasteful; and a strong Zimbabwe is terribly important to test cricket, as is a strong New Zealand.

And I realize I am preaching to the converted here, mostly, and I freely admit that I don’t get all the ins and outs of cricket scheduling, and I am sure there are a myriad of other considerations that I am not touching on, but one single test during a month long tour is just simply short sighted.

And, shoot, tests rarely last the full five days anymore anyway, so it’s not like a second test would add that many days to the tour.  I digress…

The one test of this series will take place from 26 January through 30 January at the McClean Park Ground in Napier, New Zealand. 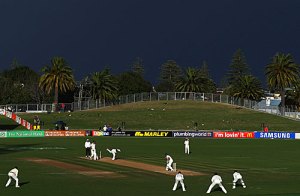 The ground has four stands and large grass bank.  I love a ground with a grass bank.

And from what I can tell via Google Maps, the ground is actually set right into the heart of an urban area, unusual in world cricket: 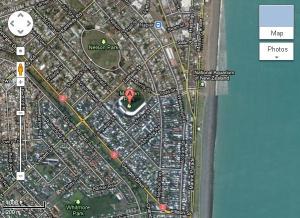 And here is your geography lesson: 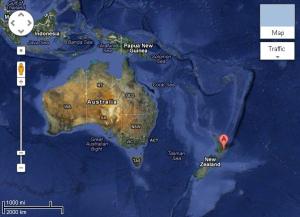 In fact, of the nine tests played at the ground, only two have produced a result, and both were New Zealand losses: to Sri Lanka in 1995, and to England in 2008.

The ground is known for its batter friendly pitch, which would explain all of the draws.

Zimbabwe took a forced leave of absence from tests in 2005, and played its first test since the layoff just this past summer, beating Bangladesh at Harare.  And they only played two other tests in 2011, losing both (Pakistan and New Zealand.)

New Zealand has announced its test squad for the match, and back is the young quick Doug Bracewell who took six wickets in the Kiwis’ win at Hobart – and it looks as though the talisman Vettori is back in the squad, as well, after being out injured in Tasmania.

I will admit I know very little about Zimbabwean cricket, but here is their squad list.

They are captained by Brendan Taylor, who has played in 16 tests – a lot considering Zimbabwe’s layoff for most of the last seven years. Taylor has been in the international squad since he was 18, and has played in 129 ODIs for his country, despite being only 25.

He also plays domestic cricket in New Zealand, so he should be well suited to the conditions.

And the conditions should be good, weather wise: mid 70s and cloudy, which should keep the pitch from being too batter friendly.

Prediction?  A draw. But it will go the full five days, something really unheard of in test cricket lately.

Back on the pitch:

South Africa and Sri Lanka are playing in their final ODI today in Kimberley.  South Africa has already won the series, so its a bit of dead rubber, but it would be nice for Sri Lanka if they could win at least one of these games.

The hosts are 291/7 with one over left. That’s a lot for Sri Lanka to chase, and I just don’t see it happening for them.

Also, in Chennai, Rajasthan just keeps…on…batting…. They are 404/2 after two full days.  And considering the match can be decided on first innings runs, I suppose we can’t really expect to see a sporting declaration any time soon.

I think is a great story, a double ton to bring his only club their second Championship in as many years, so I will forgive his rather unexciting approach to batting.

Enjoy your time out in the sun, Vineet.