One upcoming bit of cricket that I forgot to mention in yesterday morning’s post was the Caribbean Twenty20 Cup.  Normally, this is the kind of tournament that I would completely ignore, however all of the matches will be available live on ESPN3 – and because the Caribbean is of course in my hemisphere, I will be able to watch a great deal of it (there are two matches a day, one in the mid-afternoon and one in the evening, central standard time.)

Considering the above, I figured I would write a bit of a preview:

First of all, the tournament has positively nothing to do with Allen Stanford and the Stanford 20/20.  It is a brand new tournament which had its’ inaugural season in 2010.

(Side note: I thought it was really odd that one of the players being interviewed in the actually disappointing Fire in Babylon was wearing a Stanford 20/20 polo shirt).

The competition features seven domestic squads: Barbados, Guyana, Jamaica, Leeward Islands, Trinidad and Tobago, and Windward Islands.  The Canadians have also been invited every year so far, including this season.  In 2010 and 2011 Hampshire and Somerset played in the tournament, but this year Sussex and Holland have taken their places.

The ten teams are divided into two groups, with every team playing each team in its group once.  The top two teams from each group advance to the knock out stages.

Importantly, the top performing domestic team (i.e. not Canada or Sussex or Holland) gets the chance to playing in the Champions League t20.

Trinidad and Tobago won the tournament last season, Guyana the year before.

All the matches this season will be played in just two different venues: The Sir Vivian Richards Stadium in Antigua, and the Kensington Oval in Barbados.

The former ground was built in 2007 for the World Cup, using mostly money from Chinese investors.  It seats 10,000 and while it has hosted test matches, the most recent test had to be abandoned due to unsafe outfield conditions. It has not hosted one since and it looks as is if will not be hosting one when Australia visit the West Indies this spring for three tests.

There is not a great deal of character to the ground, despite its namesake, and I am sure it will be mostly vacant for the majority of the matches it hosts, but it is not a terrible looking stadium: 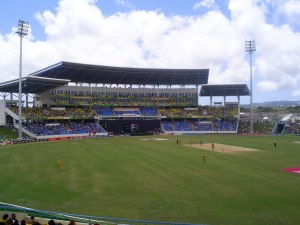 And I like the grass knolls.  Every cricket ground should have grassy knolls.

Also, lest we forget:

(Annoying that that video won’t embed. It’s Richards and the fastest test century every – 56 balls – in 1986.)

The latter ground, of course, was built in 1882, has hosted 43 test matches (the first one in 1930), and it will be hosting a West Indies v Australia test in March

It currently seats 28,000 after a drastic renovation for the 2007 World Cup, during which it hosted the final between Australia and Sri Lanka – a very nice cricketing memory for me.

Here it is post-renovation: 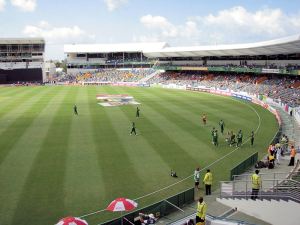 It’s wiki page has a lovely gallery of pre-renovation photos, check it out.

The first match of the tournament is on Monday, with the final on  the 22nd of January (a Sunday).

Twenty20 is of course not my favorite format, but after reading about this tournament and writing this post, I find myself a bit excited about it.

It’s not a test series, but it is cricket, in my hemisphere, and I should do my best to support it.