Hampshire County Cricket Club, aka The Royals, is another club from the south of England where cricket was first played, and has been around in one form or another since the 18th century, but the club as we know it was formed in 1863 (the Emancipation Proclamation, Gettysburg), and made their First Class debut in 1864.

However, they were demoted in the 1880s and were not admitted to the County Championship until 1895 – and it was another 66 years until they won their first title.

Hampshire won a second County title in 1979 thanks to an influx of West Indians into the side, and they have been mildly successful in the one day tournaments over the last few decades, as well, most recently winning a t20 cup in 2010.

Up until 2001, the county played their home matches at the County Ground in Southampton, at which time they moved into a state of the art new ground: The Rose Bowl: 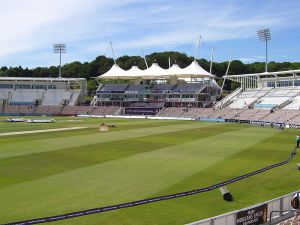 The ground opened to much fanfare in 2001, it can seat 25,000, and it hosted its very first test this past summer during Sri Lanka’s tour of England.

Oh, it has also hosted concerts by the likes of REM and Oasis.

I don’t mean to editorialize, and I will be the first to admit that it is an impressive structure, and yes I know I have in the past drooled over newer cricket grounds in the U.A.E. …but the Rose Bowl just doesn’t do it for me.

I like cricket grounds in England to have history, and if not history then character.   And the Rose Bowl, I am sorry, really has neither.  It’s a freeway exit.

(Says the Arsenal fan.  The irony is literally dripping off my keyboard.)

Hampshire has been lucky enough to feature several quite famous players, Shane Warne notwithstanding.  Sam Collins, in his write up on Hampshire, points me to Phil Mead, who hit 48,892 runs for the club, the most in its history, including a mind boggling 138 hundreds.

On the bowling side, Malcolm Marshall played for Hampshire from 1979-1993.  Mr. Marshall needs no introduction to even the most naive of cricket fans, but for the layman: he was West Indian quick bowler, probably one of the finest pace bowlers to ever walk onto a cricket field, and part of West Indies test side that dominated the sport for 15 years.

He took 376 test wickets (his last wicket belonged to the one and only Graham Gooch) and over 1,600 first class crickets.

If I had a time machine, and could go back in time to watch one cricketer in his prime, I would be hard pressed not to pick Malcolm Marshall:

At the time of his death, he was a bowling coach for Hampshire County Cricket Club.

Currently the side features one my favorite cricketers around today, Shahid Afridi, as well as Aussie international, Simon Katich, and thanks to the deep pockets of billionaire owner Rod Bransgrove, the club will probably continue to feature high class international players and compete deep into most one day competitions.