I decided to write about Middlesex County Cricket Club next, as theirs is the only ground that I have actually visited.  Yeah, I didn’t see a match at Lord’s, and I didn’t even go inside the ground, but I did steal a glimpse of the famous sloped pitch, and I did get a picture in front of the famous sign, and I did touch the exterior bricks… 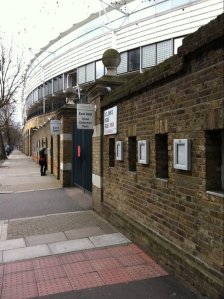 Since 1877, Middlesex, of course, have played the majority of their home matches at the self proclaimed home of cricket: Lord’s Cricket Ground in St. John’s Wood.  A stone’s throw from Abbey Road Studios, 221 Baker St, and Regent’s Park: quintessential London. 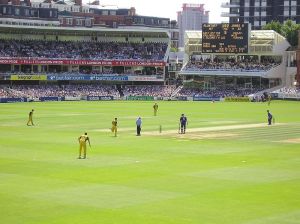 What can I say about Lord’s that has not already been said?  It seats 20,000, was established in 1814, and has gone through several major renovations throughout the years. It has hosted over 100 test matches, and was the venue for the 2000th test match this past summer.

(By the way, a real thriller of a test match is concluding in South Africa as I type.  Australia need five runs with two wickets left in hand.)

Famous players? Almost too many to count. Patsy Hendren scored the most runs for the club, with 40,302 between 1907 and 1937.  (Thirty years with the same club…unimaginable nowadays.)  Fred Titmus took the most wickets with 2,361 between 1949 and 1982.  (Thirty-two years with the same club…I guess there is something to be said for employing amateurs…)

Oh, and the club wears pink during its 20/20 matches in support of a local Breast Cancer Charity.  So, I don’t know, I think that’s pretty cool.

And that, dear readers, is Middlesex County Cricket Club.

On the pitch: Australia won by two wickets, leveling the series.

Yesterday, Pakistani cricket hero, Shahid Afridi, single handedly hauled his country over the line yesterday, beating Sri Lanka by 26 runs in Sharjah.  He scored 75 off of 87 with the bat, and took 5 for 35 with the ball.  A legendary performance.