And I really have no excuse.  Yeah, my dog died, and yeah work has been difficult, and yeah school has been, um, school, but I cannot pretend that I do not have an hour or so every day to write a quick post.

What I need to do is to start writing in the evenings.  That would solve everything.

That most frustrating part of this unscheduled and long-term hiatus has been the fact that this silly site was actually getting some readers right before I stopped posting.

Hopefully, they will come back and continue to correct my errors and give me a hard time about my American-ness.

Upcoming series include: India versus England, South Africa versus Australia (on Willow.tv), Pakistan versus Sri Lanka (in the United Arab Emirates), and Bangladesh versus the West Indies (only one t20 and two ODIs, but all three are on ESPN3.)

I won’t go into too much detail on any of those right now, but I do look forward to covering each respective series as they get started.  Quickly though, the Pakistan v Sri Lanka series does start with three straight test matches – those should be fascinating to follow.  Unfortunately, the first ball of each day is at one in the morning my time, which is not really conducive to any sort of active coverage.

Oh, and the Champions League t20 tourney is lurching along.  I suppose I should read about that before commenting on it.

Okay, so, where do they play their cricket in the U.A.E.?

There is also the Dubai International Cricket Stadium in, um, Dubai.  It seats 25,000 and has also only hosted one test (also Pakistan v South Africa, and that match was also drawn).

I will admit, it is also rather easy on the eyes:

Finally, there is the Sharjah Cricket Association Stadium.  It was built in 1982, seats 27,000, and has a more classical cricket stadium style: 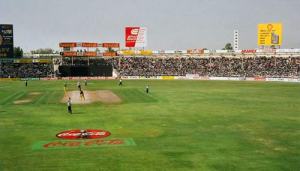 It has hosted four tests, the last in 2002 (Australia v Pakistan – the “hosts” won by an innings and 20 runs), and was the home of cricket in the UAE during the sport’s hey-day in that part of the world (80s and 90s) but it has been a third choice ground since the two above grounds were built.

1. The UAE really seems to benefit, cricket-wise, from political instability in Pakistan.  If I were into conspiracy theories, I could write 1500 words on this…but I am not.

One Reply to “Rajasthan v Rest of India at Jaipur, Irani Cup”